Legend of the first flute

A very long time ago there was a young man who was very interested in a beautiful young girl. He was always trying to get her attention, but she never seemed to notice him. Whenever she was present he would ride his horse proudly, but nothing he did seemed to attract her. One day when the girls were down by the river getting water, the young man went down to the river and began diving off rocks and swimming across the river, to show her how skilled he was, but again she paid him no mind. Dejected, the young man walked into the nearby old growth forest and sat down at the base of a long dead cedar tree. As he sat there thinking about this girl, a woodpecker landed on a hollowed limb that was over his head, the limb had been hollowed over time from the wind and weather. The woodpecker began to peck holes….tap, tap, tap……… along the length of this hollowed limb…….. tap. tap, tap…….as the woodpecker pecked, the limb broke off and fell next to the young man, and as the wind blew over this hollow limb with the holes in it, he heard musical voices coming from it.

He picked it up and found that when he blew into this limb and covered the holes, he could make beautiful, mournful music to match the feelings in his heart. He sat there for a time making up haunting melodies. The young girl heard this music coming from the old growth forest, and it was such a soulful sound that it captured her heart. She followed the sound of music into the woods, where she saw him sitting there at the base of this cedar tree playing this first flute that was given to him by the Woodpecker, and as she listened she fell in love with his music and fell in love with him. They went off hand in hand to live happily ever after.

​One of the more popular uses for the Native Flute was for courting, to attract a mate. The legend also says that once you got a mate, you were to put the flute away and never play it in public again, because if you played it in public again, you might attract someone else? 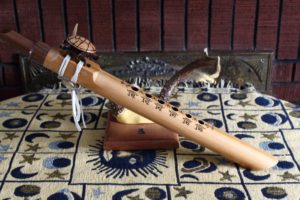 Have a listen to what our flutes sound like

We have spent many hours perfecting the sound of each flute

Each flute has a voice of it’s own.

Not one is identical 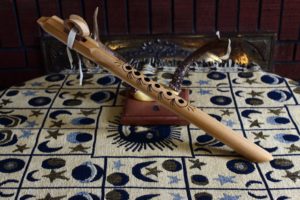 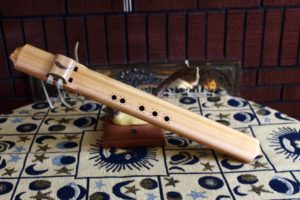